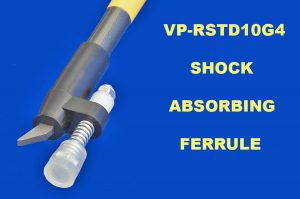 In 2020 we introduced the Generation3 damping ferrule using a stiffer spring for increased shock absorption. Unlike the first two generations, the spring plunger in Generation3 (and the new Gen4) is field replaceable.

The plunger bolt on Generation3 is Grade 12-9, the strongest steel available for a 4mm bolt. On very abrasive pavement, the bolts occasionally wore out before the carbide ferrules needed to be replaced. We researched some thermoset polyurethanes that have exceptional abrasion resistance.  As a result, we created a polyurethane cap that covers the head of the bolt on the V2 Generation4 spring loaded ferrule. Polyurethane is a good shock absorbing material, so Generation4 also has better shock damping than Generation3.

Asphalt is a waterproof bitumen that binds sand and crushed stone and is used to make our paved roads and recreational paths. The amount of asphalt is usually never more than 9%. This means that over 90% of the road material consists of silica particles in sand and crushed stone that are harder than tool steel. The tungsten carbide we use in V2 ferrules is hard, but only slightly harder than silica. On the Mohs hardness scale, talc is the softest material and is given a value of 1 and diamond, the hardest of all known materials, a value of 10. Heat treated tool steel on the Mohs scale is 6 to 7, while the silica particles are 8 and the tungsten carbide in V2 ferrules about 9. On old roads and on chip sealed pavement, there are more silica particles exposed and the bolts used in the Generation3 wear faster than on newer roads.

The Taber abrasion test is a standard method for evaluating resistance to abrasion of materials. We chose a thermoset polyurethane that had the best Taber test results we could find. Thermoset polyurethane is made from isocyanate and a polyol hardener. Isocyanate rapidly absorbs moisture in the air. The moisture generates gas in the isocyanate that can cause bubbles in the molded parts. We remove the moisture and bubbles in the liquid mixture by placing the mold in a vacuum chamber. After de-gassing, the mold is placed inside a 4,000 Torr steel pressure chamber until the mixture cures and solidifies. The atmospheric pressure at our location is about 760 Torr so the pressure inside the chamber is 5.2 X higher. The high pressure makes the polyurethane denser and more durable than curing the isocyanate-polyol to a solid elastomer at atmospheric pressure.

As can be seen in the photos above, the polyurethane covered bolt performed much better in the abrasion test. Generation3 and 4 were both run against a silica carbide grinding wheel for 2.5 hours under a load of 1Kg. The six-inch wheel was run at 20 RPM and the abraded particles removed with a vacuum system.

Are shock absorbing ferrules beneficial? Absolutely! The shock generated by the carbide tips hitting the hard pavement can aggravate tendonitis or other shoulder and elbow problems. Dave Johnston is an elite skier, who at the 2019 World Masters Championships in Norway, finished 1st in the 10K freestyle, 2nd in the 15K and 5th in the 30K. This is what Dave wrote us about the Generation3 shock absorbing ferrules.

“After using the ferrules for about 250 kilometers, the spring mechanism is as good as new, no looseness / play noted. I did not need to do any tightening. I can say that the ferrules do a good job of absorbing the shock! You chose a good test subject in that I have some tendonitis on the inner part of my left elbow. So, what I’ve been able to do is to evaluate the amount of soreness after rolling with the spring- loaded ferrules one day to the amount of soreness after using my Swix Triac the next. There has consistently been much less soreness after using the spring ferrules. I also feel that using the shock absorbing ferrules has a positive impact on my technique. I find myself applying more force in my poling. Also, because the spring extends beyond the carbide tip, I find myself coming up higher with my hands and hips, putting my body in a better position

for power and balance.”