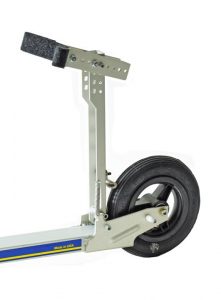 The original brake system for V2 roller skis was developed over twelve years ago, but the Patent was not issued until 2010. Since the introduction we have made a number of improvements, many based on comments by users, but there have been no major changes.

We are now introducing the first major improvement of the brake since its commercial introduction in 2006. Some skate boots are now so tall that the brake arm yoke, even when adjusted to the highest position, touches the boot instead of the calf. For the most efficient braking it’s important that the yoke engages the calf, not the boot.

The new brake arm and yoke is not just taller, but also stronger and has more vertical and horizontal adjustments to better fit the users anatomy, and is designed so that there is no need to drill a safety screw hole. In addition to being functionally better, we think it’s also more attractive.

We still have some of the older brakes in stock, so the new system will first be introduced on skis with brakes mounted at the V2-Jenex facility.