Replaced by the Gen4 ferrule –

V2 has a worldwide reputation for good roller ski ferrules. We tried many different carbide formulations before we found the best compromise between hardness and strength. Carbide is very brittle, and if not securely held in the plastic housing the tip can easily break. We developed geometry between the carbide tip and plastic that for over twenty years has been bullet proof. 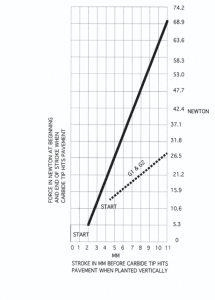 When we decided to make a shock-absorbing ferrule, we knew from experience that spring loading the carbide tip was not the answer. We wanted the shock-absorbing feature to be independent of the carbide tip. The major advantage is that if the shock absorbing spring should fail, the carbide tip remains intact and the skier is still able to pole. For the G3 version we changed the spring retainer from a plastic unit to a high strength 4mm socket bolt. We are now able to use a smaller diameter spring with a higher damping force. As can be seen in the graph below, the damping stroke has been increased by approximately 40%. The spring force when the damping plunger first hits the pavement is lower on G3 than on the previous models, but after only 1.5mm of compression the force is equal to starting force of G1 & G2, and then increases rapidly. When the carbide tip penetrates the pavement the damping force of G3 is more than 2 times greater than G1 and G2. The result is greater shock absorption. Another advantage with G3 is that if the spring should fail it can be replaced by removing the nut and 4mm bolt. This was not possible in the G1 and G2 version

REPLACING THE SPRING OR ALTERING THE LENGTH OF THE DAMPING STROKE

Tools required: 3mm Allen wrench (supplied) and 7mm wrench (not supplied). The damping stroke can be shortened by tightening the nut. We do not recommend lengthening the damping stroke by loosening nut. To replace the spring, or bolt, simply place the 3mm Allen wrench in the head of the socket bolt and with the 7mm wrench remove the nut and install a new spring or bolt. When supplied the bolt is covered with a light layer of grease. If the spring-loaded device is not moving smoothly compress the spring by pushing the bolt against a solid object and put grease on the non-threaded portion of the bolt.

“After using the ferrules for  about 250 kilometers, the spring mechanism is as good as new, no looseness/ play noted. I did not need to do any tightening.
I can say that the ferrules definitely do a good job of absorbing the shock! You chose a good test subject in that I have some tendonitis on the inner part of my left elbow. So what I’ve been able to do is to evaluate the amount of soreness after rolling with the spring loaded ferrules one day to the amount of soreness after using my Triac the next.There has consistently been much less soreness after using the springs!
I also feel that using the shock absorbing ferrules has has had a positive impact on my technique. I find myself applying more force in my poling. Also, because the spring extends beyond the tip, I find myself coming up higher with my hands and hips, putting my body in a better position for power and balance.”  David Johnston (first in his age group in the 10- kilometer freestyle race at the 2019 Masters World Cup in Norway. Dave also placed second in the 15K and 5th in the 30k freestyle races.)

“Since the day I sent you the feedback I have only used the Generation 3 VP-STD10 Ski Pole Ferrule. I have skied over 200KM on them. I like the way they rebound after I make a pole plant. Also it is a personal thing as to where I plant my pole and my body position on my skis as to how quick the rebound from the pole plant is.  I give the new Generation 4 VP-STD10 Ski Pole Ferrule an A+. Thanks again- David Dinowitz